This is the reverse of the 2015 Platinum Proof one ounce American Eagle coin.
​It came out December 3rd and is priced at $1250, but that includes a handsome presentation case.
​It shows Liberty and the American Bald Eagle representing Freedom.
​
​SARATOGA NATIONAL HISTORIC PARK 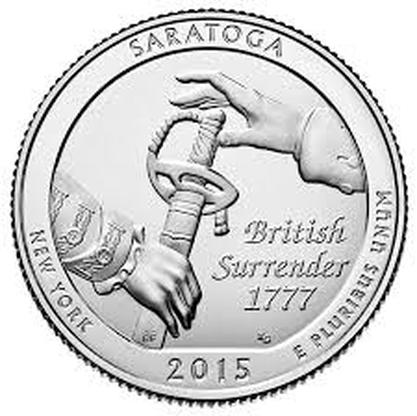 A crucial American victory occurred here in 1777 as American forces
defeated a stronger British force.  The Battle of Saratoga produced
such an important victory that it secured America's hope for
independence and won over the support of foreign countries.

The Americans basically defeated a three pronged British attack in
northern New York that was the stepping stone to independence.

Saratoga became a National Historic Park in 1938 when it was authorized
by congress.

The Park is located along the Hudson River just north of Albany.

If you go to Saratoga you would see scenes like these.
Click on one to see a slightly large image.
​
BOMBAY HOOK NATIONAL WILDLIFE REFUGE
​

​This is the 4th new quarter out this year and it features Bombay Hook, a natural wildlife refuge for thousands of birds, who migrate through here every year.

Along the Delaware coast, it consists of 15,978 acres of mostly salty tidal marshes that contains excellent breeding areas many kinds of birds and other animals.

It was established in 1937 and also supplies biologists with an excellent area of which to study.

Some freshwater area are also present for other kinds of animal life.

These pictures should give you a feeling of the vastness of this park.  A little larger picture will appear if you click on one.
​BLUE RIDGE PARKWAY

﻿The latest quarter from the US Mint features the Blue Ridge Parkway in North Carolina.

The idea of this magnificent road, was hatched in 1933 with FDR in on the decision.
The full length was completed in 1987.

It stretches 469 miles through North Carolina and Virginia, as well, and has 176 bridges along its length.

The vistas one can see along the Appalachian Highlands are breath-taking.

Animals and plants are extensive and beautiful picture taking is along every mile.
﻿
﻿Some views of and from the Blue Ridge Parkway.  Click on a picture to see a little larger version.﻿

The Kisatchie National Forest in Louisiana covers more than 600,000 acres and is spread across seven parishes (a parish is the same as a county) and is divided into five managed units or Ranger Districts.

In this national forest are hidden bayous with bald cypress groves and old growth pine teeming with natural beauty and an abundance of wildlife.

Among the beautiful landscapes are many trails of distances running from a half mile to as long as thirty miles.

If you like fishing and hunting, Kisatchie has plenty of places you can drop a line or watch for game.

﻿
﻿Some views of Kisatchie.  Click to see a little larger picture.

MARCH OF DIMES SILVER DOLLAR
﻿The obverse shows FDR and Dr. Jonas Salk (used with permission of the family of Jonas Salk) the leaders in the fight against polio.
Through the intensive work of Dr.'s Salk and Sabin a vaccine was found and now polio has been virtually eradicated.
The March of Dimes continues it's efforts today towards healthy pregnancies and healthy babies.


﻿Is FDR facing the same direction as he is on the dime?

And here is the Silver Dollar which will be issued in both Proof and Uncirculated from Philadelphia.
Cost will be $46.95 and $43.95 respectively.

There is also the clad half-dollar you see here.  It will be minted in Proof from San Francisco and in Uncirculated from Denver.
Cost will run $14.95 and $13.95 respectively.

AMERICA THE BEAUTIFUL QUARTERS FOR 2015

These are the new quarter designs for 2015.  As the year goes on each one will be featured here in a special way.
They will be issued in this order, left to right:  Nebraska, Louisiana, North Carolina, Delaware, and New York.
Click on one to see a larger image.

The US Mint is scheduled to release the Silver Proof Set and the Clad Proof Set of these quarters in January.
Lansing Coin Club Lansing Michigan Coin Club Coin Club of Michigan Numismatic